Hanel today is regarded as a leading political draftsman in Germany. Generations of readers have grown up with his caricatures: Walter Hanel, who has looked into the image of our politicians such as Strauss and Kohl. Walter Hanel brings the essentials to the point, without being ridiculous and without being personal injuring.

Born in Böhmen and now at home in the Rhineland near Cologne, Walter Hanel is always well informed politically. In his daily life, and especially on television news, he looks closely up to what his protagonists are talking about, how they argue and how they act to and with other person. You may believe this sensible draftsman when he etsimates sometimes more than ten hours up to his last stroke. Being witty, ironic, and imaginative day by day is hard work. This is accomplished by the confident Böhmen born, who found his electoral home in the Rhineland. He is a born Prussian duty-man.

If we look longer and deeper into his work, we get to know what we wants to tell us.

The late Rheinish cabaret artist Hanns Dieter Hüsch about his friend Walter Hanel: Hüsch had to know. He knew Walter Hanel very well; they belong to the left-liberal circle around the Cologne-based gourmet Gigi Campi, whose traditional Cafe on the Hohe Straße in Cologne in the seventies became a popular meeting place for musicians, intellectuals, journalists and politicians. The photographer Chargesheimer came in and out, Heinrich Böll met in the cafe with Günter Grass, even Caterina Valente passed by for an espresso.

The "nest squat" and his critical look

Walter Hanel is a nesting squat that needs quietness and peace. He has a wary, restrained look. He can think with his eyes. Because he thoroughly considered, he is superior to the other. (He looks to the people from the above). He has a look for the whole, but also much sense for the detail. He reduces political and social events and packs ( dreams) it into a drawing.

What made him a caricaturist?

Perhaps it was the bomb attack on Dresden in February 1945. Walter Hanel had been right in the middle. He had been sent to the Saxon capital as a fifteen-year-old pupil from the not far distant Altenberg to help the refugees arriving there.
„Not the real attack was the worst for me, but the day after, the destroyed city, the countless dead everywhere. If I had not seen this, I would paint little flowers today“ – and Germany would no longer have its oldest active cartoonist. 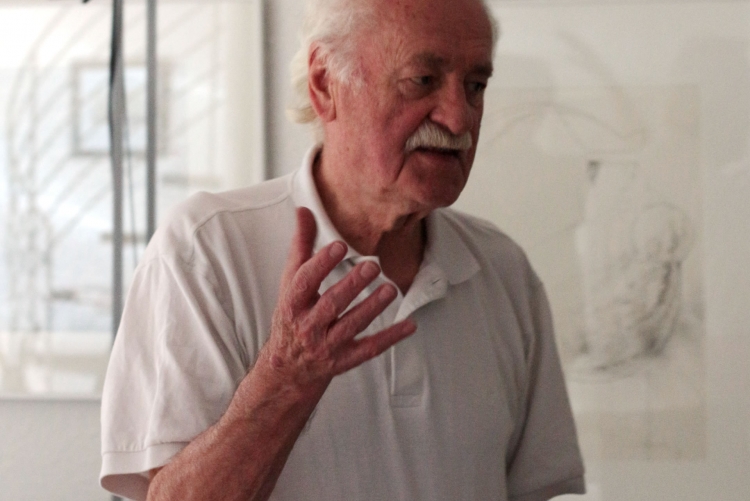